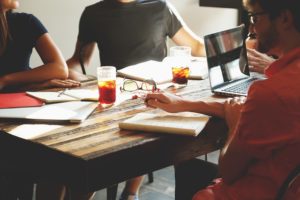 Co-working spaces are places where two or more people or companies share working space. Many of such spaces are run as accelerators or incubators where start-ups go for cheap rent and business support, among other benefits.

Some of the biggest players in the co-working market include Spike Design offering co-working for creative professionals and artists in Bristol, and Central Working with several spaces in UK’s capital city, as well as in Cambridge and Manchester.

The number of co-working offices in London have been on the rise, making it possible for everyone, from small tech start-ups to individual freelancers to get involved. Even established companies use co-working options to share space and ideas. The city has remained the world capital for co-working spaces, ahead of even New York. In 2017, 2.5m sq. ft. of space was leased to flexible workspace providers in Central London, an increase of 190 per cent on 2016.

London doesn’t get to have all the fun though, because some of the UK’s largest cities outside of the capital city saw leases jump from 2 per cent to 7.5 per cent in 2017. In fact, about two thirds of the flexible workspace market in the UK is outside London, including places like Newcastle, Manchester, Leeds, Glasgow, Edinburgh, Cardiff, Bristol, and Birmingham. For the shared workspace market to be growing at the rate it is, there has to be a reason.

Among the major attractions for new entrepreneurs looking at co-working spaces is the facilities. They often come with facilities like high speed broadband, formal and informal meeting spaces, desks, and cafés, among other enticing options which a small business would not normally be able to afford.

If nothing else draws people to co-working spaces, sky-high property costs will, especially in London. With co-working centres, costs are predictable because you are sharing the cost with other businesses. Rent includes Wi-Fi, insurance if you work directly with the public, cleaning, business rates, and heating, making it easier for a new business to budget.

There is also the benefit of having access to more flexible options, especially as there is more competition.For instance, there are hot desks for people who want a single desk, fixed desk for an entire team, private office space, and ‘live and work’ space which allows you to live in a flat alongside your office space.

While co-working spaces come with great benefits, there are a few cons new entrepreneurs should be aware of. First, you won’t have as much freedom, which is expected in any communal arrangement where you are expected to compromise sometimes.

Unfortunately, many co-working spaces tend to cram as many desks as they can manage into their spaces, so you would most likely feel cramped if you are the type that prefers working in open spaces. There’s also the fact that it can be expensive even if it is cheaper than renting your own space.