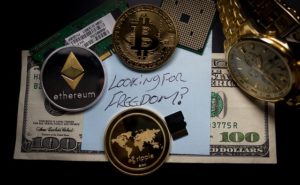 From shadowy beginnings the cryptocurrency is becoming increasingly mainstream, but Bitcoin’s value still yo-yos violently and its future is highly uncertain. Gold investment by contrast is far more pedestrian, maintaining a measured store of value throughout the millennia. Are you prepared to bet your future on a roller coaster ride?

It is currently fashionable to pay for your latte with Bitcoin at the handful of trendy coffee shops that accept the cryptocurrency. You could also theoretically use your legal tender gold coins to pay for a macchiato, (although they might struggle to give change for a£970 ounce of gold). Both are a form of currency, and both are highly valued in the market today, but which is a better investment?

Any currency relies on the belief that someone else will want that currency and you will be able to exchange it for goods. Reputation matters and it is in this regard Bitcoin comes to the table at a distinct disadvantage, with very little history and a reputation as the currency of choice for thieves and black-market traders (a legacy of its use by unscrupulous online criminals who appreciate its anonymity). That said its value has surged (and plummeted) over the last few years, so there are some investors who bought and sold at an opportune time and made a profit,but its volatility has worked against it too.

Josh Saul, CEO of The Pure Gold Company says: “When Bitcoin dropped in late 2017, we had a lot of people liquidate what they could to purchase physical gold – they craved safety, security and consistency. We’ve seen a 76% increase in people selling Bitcoin to purchase physical gold in 2018. Some of our clients are comfortable purchasing Bitcoin, but only if they also own gold to iron out the volatility.”

Gold has a venerable history as a store of wealth. It has been used for thousands of years as a currency because of its rarity and elemental stability. It doesn’t tarnish, is relatively easy to melt to produce coins or other trade able currency, and is rare enough to have an intrinsic value placed on it by centuries of civilizations.

Bitcoin was launched in 2009 as a decentralized digital crypto currency that works without a central bank or administrator.It is stored in a digital wallet and is transferred from peer to peer without a bank or intermediary. Its dissociation from the banking system is a key selling point for some investors who worry about systemic risk, but that same detachment and anonymity has made it attractive to online criminals and tarnished its reputation.

Gold deposits are mined out of the ground by mining companies.

Bitcoin are ‘mined’ by a network of thousands of computers that turn Bitcoin transactions into mathematical puzzles. The ledger of Bitcoin transactions is unchangeable because multiple miners in the network verify the transactions. There is a swathe of technical nuance to the process, much of which is indecipherable to all but the most technologically minded (see do I need to understand it?)

Do I need to understand it?

History and reputation provide a solid basis on which to understand the process of gold mining, its use as a valid currency and the popularity of gold investment.

Most people don’t understand how Bitcoin works, including many finance professionals. This doesn’t have to be a hindrance to investment but it does make it more difficult to understand the risks associated with Bitcoin. For example understanding blockchain technology provides insight into the security of the cryptocurrency. Knowing how supply is limited provides insight into the risk of Bitcoin inflation. All the risks of the mining process and the Bitcoin wallet system lie in understanding the process which is complex and highly mathematical, and beyond the comprehension of most people.

On 10 May the gold price was £976 per ounce. One Bitcoin was worth £6734. The value of both commodities fluctuates every day, but there is substantially more volatility in the value of Bitcoin.

In 2016 gold rose 50% from £700 to over £1,055 in around six months, and has since fluctuated just above or just below £1,000. Investors looking to add the yellow metal to their portfolio can buy physical gold, a gold Exchange Traded Fund or shares in a gold miner. All these mainstream products are easily accessible, legal, traceable and transparent.

In December, the cryptocurrency started trading on the Chicago Mercantile Exchange financial futures market, providing a much more mainstream platform for betting on the future price of the currency. However, the extreme volatility of Bitcoin stock makes investing very risky. In addition to the usual supply and demand impacts, Bitcoin has had to contend with government bans, hacking fears and a steady stream of criticism from senior financial and political leaders.

Certain types of gold are legal tender, specifically the gold Britannia and the gold Sovereign in the UK. It is unlikely you would want to spend them in your local supermarket, but as legal tender they don’t attract capital gains tax.

Bitcoins are only legal tender in Japan but that doesn’t mean it is an illegal currency. It can be used as payment in most other countries it just means the absence of protection for the buyer or seller. A few, including Ecuador, Bolivia and Algeria have declared it illegal though, and some countries like China have cracked down on cryptocurrency exchanges.

Across the world debates rage on the best way to regulate cryptocurrencies and the industry that has grown up around them. In the UK Bitcoin is unregulated and treated as a ‘foreign currency’ for corporation and income tax purposes. In March, Bank of England governor Mark Carney said cryptocurrency exchanges needed to be held to account in the same manner as the rest of the financial system, and the regulation of cryptocurrencies is currentlythe subject of a Treasury Select Committee enquiry.

The Pure Gold Company provides all buyers with a certificate of authenticity and a buyback guarantee which means clients can liquidate their gold as soon as they’re ready. The company sells the gold investment immediately to lock in live prices, and returns the funds within 12 working hours.

You need to go through an exchange to sell Bitcoins, and the process can be complicated and lengthy.Considering the price volatility, it isn’t a case of selling up when the market turns. Investors may be left with greater losses than they anticipated because of delays in the sale.There have also been reported cases of fraud because of the unregulated nature of the cryptocurrency, so it really is both buyer and seller beware. When the cryptocurrency crashed in December, several online exchanges went down under the sheer volume of sellers and many investors were unable to sell quickly as the price plummeted.